We had several changes to our models last week.  The Smart Core and Core models reduced exposure to small-cap equities and added to quality large-cap issues.  The models also increased exposure to Emerging markets where economic recoveries look more robust than in the developed international economies.  In our Flex series, we added high yield exposure and emerging market bonds while reducing exposure in long and mid-duration US Treasuries. 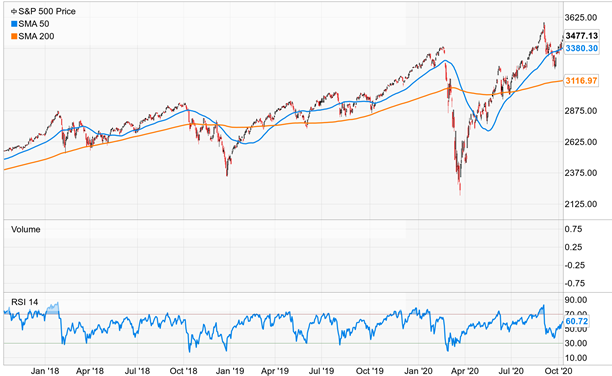 Investors regained optimism that a stimulus package deal was close to being inked, which helped send equity markets higher for most of the week.  On Tuesday, Trump tweeted that an agreement would not be forged until after the election and instructed his advisors to stop negotiations.  The tweet sent shares lower on Tuesday, but subsequently, they regained ground after news reports suggested that Pelosi and Mnuchin were still trying to negotiate a deal.  By the end of the week, President Trump was said to favor a much larger fiscal package than his earlier proposals.   Stay tuned.

A better than expected ISM Non-Manufacturing report also helped market sentiment.  The September report showed increased momentum in services coming in at 57.8 versus an expectation of 56; the report was even better than the August figure of 55.  On the other hand, Initial claims continued to paint a complicated employment picture.  For the week, 849k people claimed unemployment insurance versus and expectation of 837k.  Continuing claims regressed a bit from the prior week coming in at 11.979 million.