The mega-cap technology issues led markets to another set of all-times as cyclicals took a step back after being red hot for the last several weeks.  Fourth-quarter earnings continued to roll out with mixed results. President Biden’s inauguration was followed by several executive orders that the market seemed to take in stride.  After she called for Congress to “act big” on fiscal stimulus, Janet Yellen’s nomination cleared the Senate Finance committee.  Economic data on the job front continued to be sluggish, although housing data showed record strength.  Coronavirus infections continued to increase around the globe while injections of the vaccine continued to have logistical issues.  Dr. Fauci suggested that infection rates may be close to a plateau in the US, while in Europe, more stringent lockdown measures are being considered. 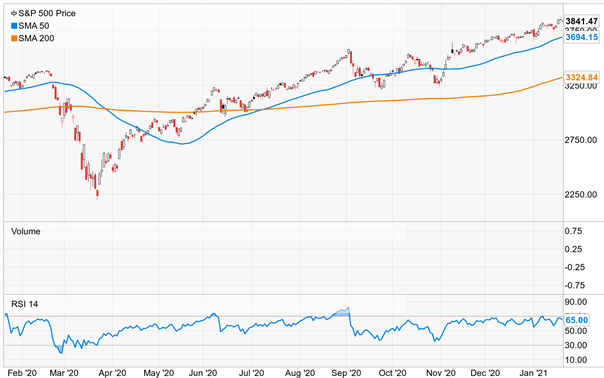 Netflix’s fourth-quarter earnings, along with some upgrades in Apple and Microsoft, jump-started a mega-cap rally for the week.  Netflix subscriber adds were much better than expected and ignited trading to the upside after the announcement.  Disney and Roku shares rose on the news as well.  On the other hand, Intel and IBM disappointed investors with their earnings results and outlook.  Despite Intel’s results, investors continued to pour into the Semiconductor sector, which had another stellar week.  IBM beat on the bottom line but came in light on revenues and induced a steep sell-off.  Financials reported decent earnings, but investors sold the news.  Goldman Sachs, Bank of America, Morgan Stanley, and US Banc-Corp all lost ground after their earnings and muted the financial sector’s weekly performance.

Initial Jobless Claims were down 26k from the prior week to 900k but still above the estimate of 845K and stoked more stimulus rhetoric.  Continuing Claims fell 127k to 5.054 million.  Existing Home sales were up 0.7% month over month or an annual rate of 6.76 million.  Housing inventory continues to be at all-time lows, and perhaps is why we saw Housing Starts increase by 5.8%, the strongest reading since September of 2006.  IHS Flash Manufacturing and Services data was mixed worldwide, but here in the US, both data sets expressed expansion with readings of 59.1 and 57.5, respectively.